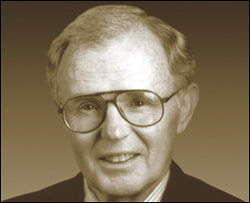 John Leo Doppman was born on June 14, 1928, in Springfield, Mass. He received an undergraduate degree from Holy Cross College in 1949 and an M.D. from Yale Medical School in 1953. After interning at Mercy Hospital in Springfield, Mass., he was a Naval Medical Officer from 1954 to 1957. Upon completing a residency in radiology at the Hospital of St. Raphael in New Haven, Conn., he was a Fullbright fellow in radiology research at the Postgraduate Medical School at Hammersmith Hospital, London, and the Karolinska Institute, Stockholm, 1960-1961. He joined the NIH Clinical Center in 1964 as deputy chief of the Diagnostic Radiology Department in the U.S. Public Health Service. There he remained for the rest of his career, except for two years as professor of radiology at the University of California, San Diego, from 1970 to 1972. He became Chairman of the Diagnostic Radiology Department at the Clinical Center in 1972. He retired in April 2000 and was named Scientist Emeritus at the Clinical Center.

Among the many honors he received during his career were the Public Health Service Distinguished Service Medal; the Gold Medal from the Society of Cardiovascular and Interventional Radiology; the Gold Medal from the American Roentgen Ray Society; and the Copeland Award from the M.D. Anderson Cancer Center. He also received several NIH awards, including the Distinguished Clinical Teacher Award, the Clinical Center Director's Award, and the NIH Director's Award. He was a member of many medical societies, including the Society of Cardiovascular and Interventional Radiology, of which he was president 1983-1984.

John Doppman's career spanned the genesis and rapid evolution of sonography, CT and MRI. As chairman, he promoted their quick adoption and the exploration of their clinical applications. During his tenure, the department was among the first in the country to have CT and MRI scanners and use intraoperative sonography for pituitary surgery.

An ardent subscriber to the Latin proverb framed on his office wall "litera scripta manet," he believed firmly in the importance of the radiologic literature. A prolific, efficient writer, he authored or co-authored 38 textbook chapters and over 516 articles in scientific journals, his name becoming synonymous with radiology at NIH. He held several editorial positions and was for many years associate editor of the Journal of Computer Assisted Tomography.

He became a leading authority in the radiology of endocrinologic problems—his major focus of interest. Throughout his career, he remained a skilled general and interventional radiologist. He enjoyed the challenge of radiologic diagnosis and excelled at the weaving of clinical and imaging information into the diagnostic process. For him, effective use of imaging rested on understanding the clinical diagnostic problems and the pathophysiology of the underlying diseases.

His approach to research was patientoriented: a grounding of research questions in clinical problems and a constant plowing of the fruits of research into improvement of efficacy of patient care and efficiency of diagnosis. His investigations were close collaborations with clinical colleagues:synergistic relations with each stimulatingsynergistic relations with each stimulating the other and cross-fertilizing the disciplines. It was through such pragmatic efforts and technical virtuosity as an angiographer that he pioneered and refined localization techniques for endocrine tumors of the pituitary, pancreas, parathyroid and adrenal glands; spinal angiography; and endovascular treatment of spinal arteriovenous malformations.

He was a consummate academician, insightful and articulate. He had a contagious curiosity that found a point of interest and question to be pursued in every case. Warm, easily approachable, unstinting with his time and knowledge, he would think nothing of spending hours going over patient studies with clinicians—teaching while solving the diagnostic puzzles.

His death in August of 2000 brought to an end 36 years of energetic devotion to clinical research and patient care at NIH. A career that earned Dr. John Doppman recognition by his colleagues as a skilled, compassionate physician; enthusiastic teacher; and pillar of the clinical research community.the other and cross-fertilizing the disciplines. It was through such pragmatic efforts and technical virtuosity as an angiographer that he pioneered and refined localization techniques for endocrine tumors of the pituitary, pancreas, parathyroid and adrenal glands; spinal angiography; and endovascular treatment of spinal arteriovenous malformations.